Hello friends, degens, freaks and others, Waffle here to pick your mind.

I wanted to open this topic to discuss Staking module, as we have been debating about PoL, SHD issuance and bond ideas, So I’d rather share my thoughts as my brain has been melting these last months from my DeFi endeavours in other ecosystems.

We are all looking forward to the deployment of Shade Protocol, with its different modules such as Bonds, ShadeSwap… And staking.

I believe this is a crucial module as it will define the use cases of SHD Tokens, but also its value capture, demand and sustainability.

First of all, the staking itself on old-generation protocols would be as such:

For anyone wanting to dive deep into the ve-model concept, I added an interesting link at the beginning of this post explaining the details of the mechanism The Pillars of Tokenomics & The ve Token Model

For the lazy others: The longer you stake (and lock) your SHD, the faster you earn veSHD. And the more veSHD you have accumulated, the more share of voting power and revenues you are owed.
If you unlock or unstake your SHD, you lose ALL your veSHD.

I repeat, If you unstake, you loose all your veSHD.

Timelock is important:
Staking SHD to earn veSHD is great, but what if you wanted to lock your SHD for a long period, because you are a committed Shade Warrior and you also understand that Shade Protocol is here to impact the DeFi landscape for the long-term?

Option should be given to lock your staking position for a period, from 4 months to a year, to accrue your veSHD balance faster. The longer you have locked, the faster your veSHD will accrue.

In the case of Curve (CRV), users can lock their CRV for up to 4 years.
Some will call it madness, but the majority of CRV is locked… FOREVER (and owned by another DeFi protocol…keep reading…)

Why only Single side staking when you can incentivise deeper liquidity?

One of the main points I would suggest at this first step would be to consider an optional staking mechanism asking the user to stake an LP position, instead of single side SHD tokens. Depending on the needs for liquidity, process would be as follow:

The above will start to make sense with what follows…

TraderJoe, which took inspiration from Curve, provides boosted incentives to veJOE holders when farming on the DEX.
As such, it rewards long-term stakers by offering them a multiplied yields on the LP reward pools: Where a regular farmer would have a 1x yield, another user that has been accumulating veSHD could have a yield multiplied by up to x2.5, depending on his share of veSHD. 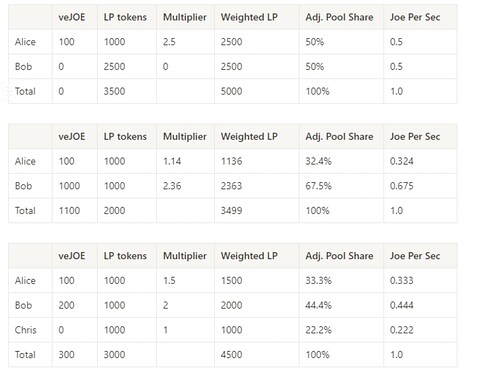 The above numbers are extracted from the veJOE medium article, and are for reference

This mechanism also incentivise other Yield Farming protocols to start accumulating JOE to offer boosted yields to its users. Convex owns the majority of CRV and controls the protocol by governance.

Could we imagine ButtonGroup incentivising users to provide SHD to their protocol, locking them forever and offering the best yields in the ecosystem, based on ShadeSwap while taking off SHD from circulation forever?

My last point would be regarding value capture of SHD token. Something that I would like us to avoid is dilluting SHD by rewarding stakers with newly minted SHD.
“If you don’t know where the yield comes from, you are the yield.”

There are a few ways of providing revenues to stakers and in our case, I would suggest to distribute a small share of the swap fees to veSHD holders.

In the case of TraderJoe, a swap fee of 0,05% is applied to each trade on TraderJoe, converted at the end of the day in USDC and distributed to JOE stakers. This has allowed JOE stakers to earn approximately 20% APR paid in stable, but fluctuating in correlation with volumes: Joe Stake | Trader Joe Analytics

My suggestion would be to apply similar fee, 0,05%, in parallel to any fee that would be integrated to Shadeswap aiming at growing the Treasury, swap it to SILK and distribute it to long-term holders (veSHD holders

Are bribes a pipe-dream?

Let’s dream a little and take this a little further:
One thing that is happening on healthier DeFi ecosystems is bribes for protocol governance
This is why the majority of CRV is locked forever: Convex, another protocol, owns the majority of it and controls the CRV pool emissions.
They receive bribes from other protocols to vote in a way or another… Crazy right… But it can go even deeper, check the last thread on the CurveWars if interested.

Imagine now that ButtonGroup wants to see BUTT thrive with deep liquidity on Shadeswap. For this it would need incentivised BUTT-SHD pair on Shadeswap, but in our exemple, the SHD emission on that pool is set to 50 SHD per day.
We can imagine BUTT distributing BUTT to veSHD holders for them to vote a higher emission on the BUTT-SHD pool, to attract even deeper liquidity…

We far from the above, but setting up the right tokenomics and mechanics for SHD now can set the protocol in stone forever as a pillar of private DeFi

So let’s see how all this staking module presents for the average user:

In the end, long time believers are rewarded and a long-term vision is set for a healthier growth of the protocol.

very interesting!! I really like the idea as someone on the ground floor. The only con I can think of is that it doesn’t incentivize newer voices into the protocol as well as the traditional staking model. Very interesting thought experiment and great read!

Are you proposing we require LPing? If so, I’m against requiring LPing on the side of the end-user. IL is real, and we shouldn’t expect end-users to bear the brunt of this to stake. Offering better yields based on your staking position is a great incentive though. I’m all for that. I’m just not for requiring LPing to stake.

Also, I feel like losing all your ve-SHD if you unstake is too harsh. Things happen and sometimes you need to unstake. I agree that once they unstake, they no longer have a say, but when they restake, maybe they should get some back. Losing all your ve-SHD seems very heavy-handed.

Staking and locking LP is very optional and depends on the needs of the protocol for deep liquidity. The IL risk is compensated by boosted rewards of course.

Regarding the loss of your veSHD if you unstake, I think it is an important mechanism, but maybe losing 50% if you unstake 50% is also an option.

@zenopie Depending on the size of their bags, small latecomers can stake through yield optimiser protocols if they want to have boosted yields, such as with the ButtonGroup exemple, or with Convex in the CurveWar exemple: Give CRV to Convex instead of staking it on Curve, so you get the maximum rewards and don’t have to race for veCRV against other protocols).

I all this staking, providing LP, bonds…what is often overlooked is the time factor that would boost rewards. Osmosis has a good approach to this with the 1d 7d and 14d bonding periods.
This allows for users to play with LP on a timescale of rewards/needs.
Would love to see this factor highlighted in ve-SHD but also other shade products.

It’s a complicated task but the user should be at the forefront of the shade ecosystem. It is these users that make or break a project long term sustainability. It is best to underpromise and overdeliver as they are more and more educated and informed. And with all defi, or rather finance the most important thing is gaining their trust.

I like the idea of proportional veSHD loss when unstaking with a possibility of regaining at least a portion of it if a user were to restake. I think that there would have to be a lot of simulations run to verify that beginning users don’t just get the lion’s share of staking rewards forever so long as they remain locked in, as I think it would disincentivize new users from joining the protocol longer term.

Very interesting ideas ser. On Terra, Apollo, Retrograde, and another (whose name escapes me rn) were building Convex type projects on top of Astroport. It will be interesting to see what team(s) decide to play that role with Shade.

Personally, I like keeping things simple. It helps my smol brain. I like the idea of staking SHD for veSHD. Then if other tokens are required for deeper liquidity, perhaps that is something that could be done via Shade Bond issuance.

Love the idea about SHD staking APR, both from putting buying pressure on SILK as well as receiving SILK as a staker.

I appreciate your contribution!

Very interesting topic here. For me. I think having a single sided staking Mechanic is good. It’s Simple, Elegant, easy to understand and execute for anyone.

That said. I like the idea of further mechanics that have different weighting to benefits incentivizing LP lockups. you can’t disregard the IL, and tho I’m fine with it, and understand how to degen my way into bigger bags, it’s just not for everyone. Id love to see things like added multiplier to yields. and veSHD, vote power, etc. By locking LP long term. Make it attractive to go long on SHD and SILK.

Give a 1x yield for single sided SHD stake, and a vote power level.

Then create s bond multiplier for such by LP providing with locked term. Give a higher multiplier for longer periods
.
I don’t know about yall, but id put a small single stake, and lock a good chunk at various levels starting with the longest term.

One thing I do want to see is realistic yields however. I want this project to be based on sustainable models.

Also, I LOVE the idea of yield in SILK.

couldn’t you create a smart contract to create wallets making a market for veSHD accounts and allowing people to transfer veSHD?